California Legislator fighting for sanity at our Capitol. Candidate for Congress.

We live on the ocean, @GavinNewsom - we can’t conserve anymore.

There are a lot of races on the ballot. Here are some clear choices.

When you're told to take a shorter shower as water flows abundantly into the ocean, your government is broken.

At the current pace we’ll have $10/gallon gas and a $1 million median home price by next year. No wonder most Californians say the American Dream is dead.

This week offers our best chance yet at something unheard of in modern California history. A tax cut. 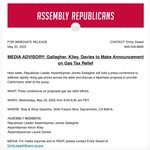 The Sheriff of LA County is blasting Newsom for feeding billions more into the “homeless industrial complex.” I’ve proposed a full audit of all homelessness spending. Let’s see exactly where the money is going.

The last time I proposed such an audit, I was one vote away from getting it approved when Newsom pressured three legislators to “abstain.” Incredibly, the Committee Chairman tried to cancel the vote as the Governor’s aides eyed him (video here).

A poll shows 89 percent of voters support my audit. Yet Newsom will still try to kill it again. He’s also currently trying to undercut two of my other proposals with broad public support.

First, AB 1638, my bill to suspend the gas tax: Newsom just proposed his own “gas tax holiday.” Except this “holiday” is hardly worth celebrating. He’s merely holding off on yet another 3-cent increase. My bill would suspend the 51-cent/gallon tax entirely.

Second, AB 1599, my bill to repeal Prop. 47: A Newsom ally has just introduced a Prop. 47 “reform” bill that hardly does anything. It would still let you steal up to $450 without consequence.

These feeble half-measures are a clear sign. Our corrupt political class can see the jig is about up, that public dissatisfaction is at an all-time high. Perhaps that’s why they’re suddenly in a rush to ram through the most radical bill yet.

Yes, on Tuesday night, by an 11-3 vote, the Assembly Health Committee advanced the bill to double taxes and create single payer government healthcare. I wish I were making this up.

Support our campaign before tomorrow’s deadline

A Fit of Spite