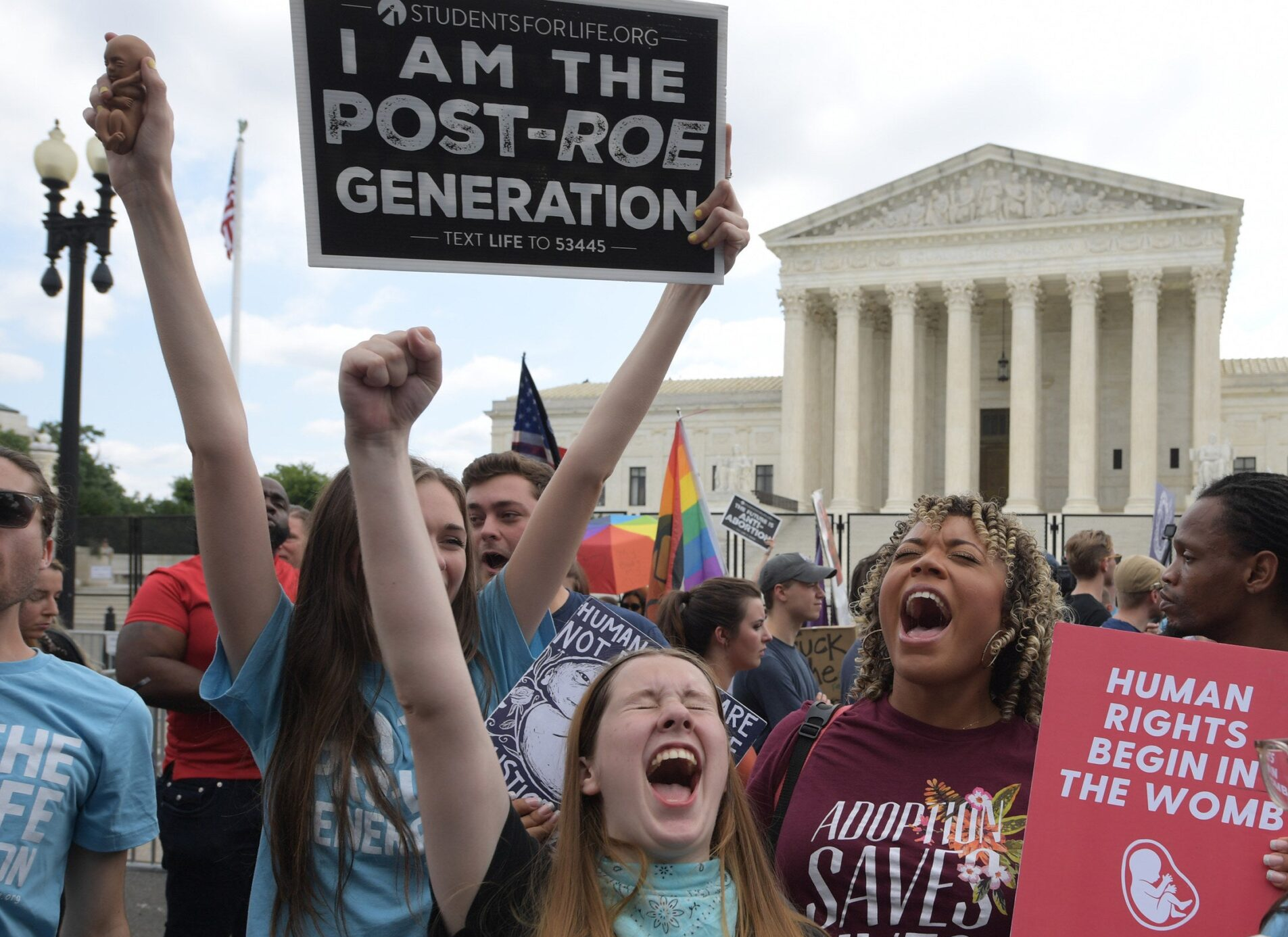 By The Sharp Edge

“Roe was on a collision course with the Constitution from the day it was decided,” remarked Justice Alito in the opinion of the Court, which overturned Roe by a 5-4 ruling.  The opinion continued, “Roe was egregiously wrong from the start.  Its reasoning was exceptionally weak, and the decision has had damaging consequences.  And far from bringing about a national settlement of the abortion issue, Roe and Casey have enflamed debate and deepened division.”  The 79-page opinion delivered by Justice Alito, which was joined by Justices Thomas, Gorsuch, Kavanaugh and Coney Barrett, declares, “It is time to heed the Constitution and return the issue of abortion to the people’s elected representatives. ‘The permissibility of abortion, and the limitations, upon it, are to be resolved like most important questions in our democracy: by citizens trying to persuade one another and then voting.’ …That is what the Constitution and the rule of law demand.”  Justice Roberts’ opinion agreed with the majority in the case but called for a narrow decision rather than overturning Roe.  Justices Breyer, Sotomayor and Kagan dissented.  The historic ruling marks a pivotal moment in our divided post-Roe nation and a victory for the pro-life movement.

The Roe v. Wade collision course was sent into overdrive when Politico published a leaked draft of Alito’s opinion in May, prompting violent campaigns by pro-abortion terrorists against Supreme Court justices and pro-life advocates.  Despite harassment and intimidation tactics deployed by the left, the Court firmly held to their final decision.  Following the unprecedented violation of Supreme Court confidentiality, Justice Thomas replied, SCOTUS “can’t be an institution that can be bullied into giving you just the outcomes you want.”  The bold statement by Justice Thomas corresponded with an even bolder concurring opinion he delivered, arguing that the Due Process Clause does not secure the right to abortion or other substantive rights, raising questions about the Constitutionality of other landmark cases to establish the right to same-sex marriage and access to contraceptives.  The opinion states, “in future cases, we should reconsider all of this Court’s substantive due process precedents, including Griswold, Lawrence, and Obergefell.  Because any substantive due process decision is ‘demonstrably erroneous,’” adding “we have a duty to ‘correct the error’ established by those precedents.”

An amicus brief filed by Liberty Counsel, on behalf of a diverse group of organizations which include 70,000 African American and Hispanic churches, was cited by the Supreme Court’s majority opinion on the basis that the history of abortion is rooted in racism and eugenics, and abortion has disproportionately affected the black population.  Planned Parenthood and International Planned Parenthood Federation are the largest abortion providers in America and the world, with a dark history entrenched with racism and eugenics, backed by hundreds of millions of dollars in donations from eugenicists like Bill Gates, to attain their goals of population control.  Planned Parenthood performs at least 35% of all abortions in the country, which grew to a total of 930,160 abortions in 2020, an 8% increase from 2017.  Based on their annual report, of all prenatal care services, adoption referrals, and abortions provided by Planned Parenthood, nearly 97% of pregnant women received abortions.  Revelations of gruesome acts by Planned Parenthood to harvest and sell aborted fetal body parts have further strengthened the resolve of the pro-life movement to bring an end to Planned Parenthood’s atrocities.

Since the SCOTUS leak, pro-abortion terrorist groups like Jane’s Revenge and Ruth Sent Us have inspired or claimed credit for fire bombings and attacks on churches and pro-life pregnancy centers throughout the nation.  The Department of Homeland Security issued a national terrorism bulletin on June 7th, warning of continued acts of violence after the Supreme Court decision and leading up to the November election.  That same day, terrorists aligned with Janes Revenge firebombed a Buffalo pregnancy center.  A day after the bulletin was issued, a heavily armed man was arrested for attempted assassination of a Supreme Court justice outside the home of Justice Kavanaugh.  Pro-abortion terrorist groups issued a manifesto calling for a “Night of Rage,” following the Supreme Court decision, which stated, “Consider this your call to action.  On the night the final ruling is issued – a specific date we cannot yet predict, but we know is arriving imminently—we are asking for courageous hearts to come out after dark.  Whoever you are and wherever you are, we are asking for you to do what you can to make your anger known.”  Prominent Democrats like Representatives Maxine Waters, AOC and Chicago Mayor Lori Lightfoot added fuel to the fire after the unwavering decision by the Supreme Court was handed down on June 24th.

Following their marching orders from the left, protests calling for violence and destruction broke out in Washington DC, Phoenix, Los Angeles, Seattle and other cities across the nation.

Despite the failed violent tactics of the left, the Supreme Court decision stands, and pro-life advocates remain resolute in their defense of the unborn.

Reactions by the right and the left to the Supreme Court decision highlight the stark contrasts between our sharply divided nation.  A new survey released by biased, left-leaning CBS News found that out of a sample of only 1,591 adults, 41% approve of the decision, while 59% disapprove.  However, support for the defense of the unborn has grown significantly stronger, as abortion policy by the left moved from ‘safe and rare’ to ‘on demand, without limits, until the moment of birth.’  Democrats often justify their radical abortion policies based on cases of rape and incest, although pregnancies as a result of rape and incest account for less than 2% of all abortions, while the vast majority of abortion procedures are performed for social or economic reasons. Since the decision by the Supreme Court was handed down, groups on both sides of the abortion issue are clashing like never before.

States to Ban or Restrict Abortion

According to the Guttmacher Institute, a total of 26 states are certain or likely to ban or restrict abortion.  Thirteen of those states had trigger laws put in place to ban abortion upon the SCOTUS ruling which overturned Roe.  Those states include Arkansas, Idaho, Kentucky, Louisiana, Mississippi, Missouri, North Dakota, Oklahoma, South Dakota, Tennessee, Texas, Utah, and Wyoming.  The bans vary from state to state in the exemptions they allow and the timeframes with which they will be enacted.  Judges blocked abortion bans in Florida, Texas, Kentucky, Louisiana and Utah.  More legal challenges to the state laws banning or restricting abortions are likely to come.

Abortion sanctuary laws go above and beyond abortion rights of state citizens and encourage interstate travel for abortions known as ‘abortion tourism.’  In light of the SCOTUS ruling, abortion tourism is shaping up to be a “big interstate business.”  Several states, including California, Colorado, Connecticut, Illinois, New Mexico, New York and Oregon are leading the charge in efforts to provide abortions for out-of-state patients and shield abortion providers from legal liability in those cases.  California is also hoping to capitalize on the abortion issue by providing business incentives to corporations who move to the state in favor of liberal abortion laws.

The Biden Regime Pushes Back

The Biden regime has once again weaponized the Department of Justice to target their political enemies.  Attorney General Garland vowed that, “the Justice Department will use every tool at our disposal to protect reproductive freedom.”  Biden’s Department of Health and Human Services announced a five step “action plan” to defy the SCOTUS ruling, including a plan to work with the Department of Justice to ensure that states cannot ban abortion medication.  The Secretary of Defense issued remarks following the Supreme Court’s decision stating that the Department “is examining the decision closely and evaluating our policies to ensure we continue to provide seamless access to reproductive health care as permitted by federal law.”  A Defense Department memo states that the Pentagon will continue to provide abortions in cases of rape, incest or when the mother’s life is at risk.  Furthermore, the memo states that the Pentagon’s leave policies, which allow service members to travel for abortions that the government may pay for, are unaffected by the Supreme Court ruling.

Democrats Distract From Failures & Galvanize Their Base

The Supreme Court ruling has enflamed debate and rallied pro-abortion supporters around the topic of abortion rights, which Democrats are hopeful will draw out voters in November.  Both Biden and Harris have appealed to the public to vote this November for pro-abortion Democrats.  The national debate on abortion has provided a break in the 24-hour news coverage of Biden’s failed economic policies.  A left-leaning NPR/PBS News poll with only 941 respondents found that Democrats are more likely to vote in the midterm elections after the abortion ruling.  However, the economy, inflation, and crime remain the top issues on voters’ minds as we head into the election season.  The abortion ruling has also revived calls by Democrats to pack the Supreme Court, though prior attempts to expand the highest court have failed in Congress. Furthermore, Biden is seeking an “exception” to the filibuster rule in order to pass legislation codifying Roe V. Wade, but Senators Manchin and Sinema have said they will not support it. Lawmakers have also introduced legislation known as the “Trans Bill of Rights,” with language “codifying the right to abortion and contraception” slipped in.

The Supreme Court ruling to overturn Roe marks a historic moment in our nation’s history and a monumental victory for the pro-life movement.  However, the fight to protect life continues, as our sharply divided nation presents two opposing views of the future.  Now, it will be up to the people and their elected representatives in each state to decide what our post-Roe nation will become.

The post The World Turns as Roe V. Wade is Overturned appeared first on coreysdigs.com.