If you thought the chaotic melt-up in US equities was impressive, this week in Chinese stocks would make even Dave Portney blush as the tech-heavy ChiNext index has soared 12% in four days. 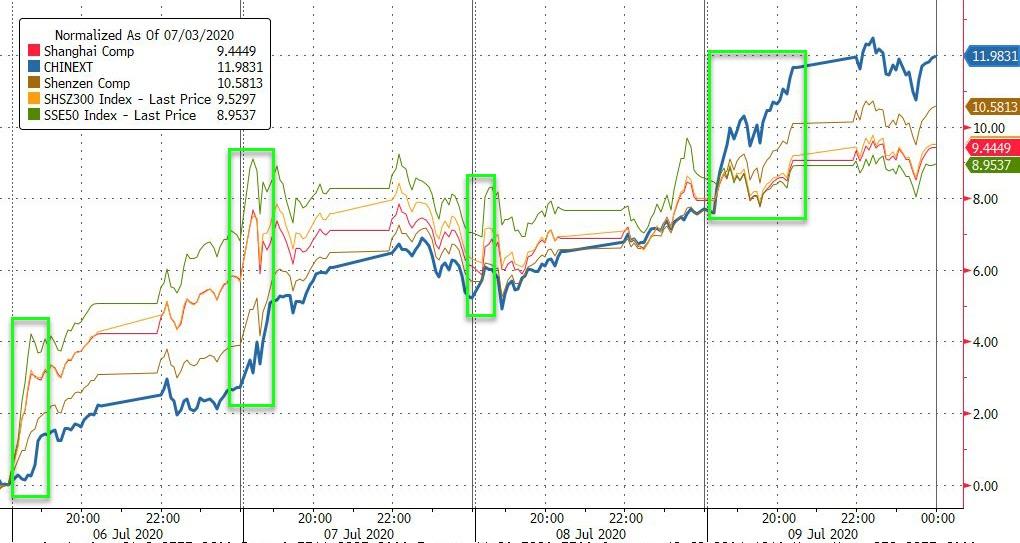 This has sent the total Chinese market capitalization has exploded at a pace faster than during the peak of the 2015 melt-up.

And five years on from that euphoria, it’s deja vu all over again as millions of ‘home-gamers’ turn back to the markets, under the umbrella of government suggestions to do so… this won’t end well (again).

While the ‘Robinhood’-rally in America is generally brushed off by the cogniscenti as being too small to matter (which is not correct at the margin given the HFT impact in extremely low liquidity environments), the situation is far different in China where, as Bloomberg reports, the nation’s individual investors account for the lion’s share of local stock trading and have been prone to extreme swings in sentiment that can have ripple effects on the economy and monetary policy.

Leo Li, a 28-year-old freelance screenwriter in the southern city of Kunming, says he’s “pretty much all-in” on stocks but isn’t borrowing to maximize returns — yet.

“With leverage, it only makes sense to add it when you can be 100% certain of gains,” said Li, adding that his family sold property last year to buy stocks.

“That usually happens when the old grannies start rushing in during the mid-to late stage of a rally. We are not there yet, but when the time comes I will be ready.”

Some have suggested an alternative theory for why the Chinese market is suddenly taking off… A resurgence in the prediction-market expectations of a Democratic Senate (i.e. no anti-China Trumpianism).

And it’s not just retail that is “all-in.” As Bloomberg reports, a Chinese quant-trading firm made 108% this year by selling every stock bought the previous day.

Zhang Ruiqi, the 34-year-old chairman of Shenzhen Qianhai United Fortune Fund Management Co., screens about a dozen mainland-listed stocks every day for their turnover, momentum and volatility. He then does it all over again the following day. That strategy, which he calls the “all-in-all-out” method, helped his flagship $5 million fund gain 108% this year through June, according to data provider Simuwang.com..

“Our strategy allows us to make money from stocks that have the strongest market sentiment on a day-to-day basis — and that has turned out to be overwhelmingly successful so far this year,” said Zhang in a phone interview from his office in Shenzhen.

He is optimistic on the market’s prospects for the second half… well, of course he is!!

As a reminder, the last time the government (and state-owned media) encouraged mom-and-pop Chinese investors to pile-in, everything went entirely pear-shaped and ended with a massive regulatory crackdown on the very speculation (and insider trading) that they had encouraged in the first place.

You would think investors would have learned their lesson… They haven’t! As Bloomberg reports:

Tim Zhao said he learned his lesson in 2015 after losing an “astronomical” figure in the stock crash. He is back in the market for a rally he sees lasting as long as five years.

“Everything is different this time,” said the 44-year-old from his office in Beijing, where he runs a movie equipment business. “It’s a lot more complicated.”

But we leave it to Roger Lin, a 45-year-old entrepreneur who runs a trading company in the southeast port city of Xiamen, for the last word…

“I’m confident that I’ll be able to exit just before the market slump,” he said.

“You can do that as long as you’re not too greedy.”

Good luck with that Roger.