if mARKKo turns bearish, limit up it is 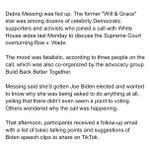 Authored by Peter Koenig via The Saker blog,

Looks like Trump is running amok with his “trading policies”. Not only has he upset the European Union – which doesn’t deserve any better, frankly, for having been and still being submissive vassals against the will of by now 90% of Europeans; but he has also managed to get China into a fury. Well, for China it is really not that important, because China has plenty of other markets, including basically all of Asia and probably increasingly also Europe, as Europe increasingly feel the need for detaching from the US.

What is striking, though, is that even at the outset of the G20 Summit now ongoing in Buenos Aires, Argentina, Trumps Ministers have made it clear that unless Europe cancels all subsidies – referring primarily to agricultural subsidies – and eliminates the newly imposed retaliatory import duties, new trade deals are not going to be discussed. Never mind that the US has the world’s highest farm subsidies.

From afar this looks like the most wicked and non-sensical trade war the US via Trump, is waging against the rest of the world – à la “Make America Great Again”. Will it work? Maybe. One can never predict dynamics, especially not in a neoliberal western world that is used to live on linearism, which by definition is always wrong. Knowingly and deliberately the west and it’s financial key institutions, IMF, World Bank, FED, European Central Bank – trick the public at large into believing their statistics and predictions – which, if one goes back in history, have always been off, way off.

All life is dynamic. But to understand this it takes independent thinking – which the west has long given up, unfortunately.

So, in response to the latest Trump-promoted trade fiasco at the G20 in Argentina, the IMF is up in arms, saying this might lower world GDP by at least 0.5%. – Even if true, so what?

In reality, there is a totally different scenario that nobody dares talk about.

Namely, what renewed local production and monetary sovereignty can bring to the world economy; precisely what Mr. Trump says he wants to propagate for the US of A – local production for local markets and for trade with countries that respect mutual benefits. The latter is of course a question not easily achieved by any trade deal with the US. But the former is an enormous economic power keg. The stimulation of local economies through internal credit, is the most commanding means to boost local employment and GDP.

Then there is the sanctions game. It’s getting ever more aggressive. New sanctions on Russia, new sanctions on Venezuela – and new heavy-heavy sanctions on Iran. And the European puppets still follow suit, although they are the ones that most suffer from US sanctions imposed on others, especially because out of ‘stupidity’ or fear, they cannot let go of the destructive empire, hobbling away on its last breath. Or is it perhaps, that those fake leaders of the Brussels construct are bought? – Yes, I mean bought with money or with favors? – It’s not out of this world, since those of the European Commission who call the shots are not elected, thus, responsible to no one.

Take the case of Iran, Trump and his peons, Bolton and Pompeo, have threatened every oil company around the globe with heavy sanctions if they keep buying hydrocarbons from Iran beyond November 2018. Particularly concerned are the European Petrol giants, like Total, ENI, Repsol and others. – As a consequence, they have canceled their literally of billions of euros worth of contracts with Iran to protect themselves – and, of course, their shareholders. Just recently I talked to a high executive from Total. He said, we have no choice, as we cannot trust our people in Brussels to shield us from Washington’s sanctions. So, we have to look elsewhere to fulfill our contractual obligations vis-à-vis our clients. But, he added, we did not buy the American fracking stuff; we are negotiating with Russia. – There you go.

The European market for Iran’s hydrocarbon is estimated at about 20% of Iran’s total production. An amount, easily taken over by China and others which are too big (and too bold) to be sanctioned by the empire. Some may actually resell Iranian hydrocarbons through their backdoor to the otherwise sanctioned European oil corporations.

Iran has another strong weapon which they already made clear, they will use, if the US attempts seriously to block anyone from buying Iranian oil and gas. Iran can block the Gulf of Hormuz, where daily about 30% of all hydrocarbon used by the world is being shipped, including about half to the United states. This might increase the price of petrol exponentially and ruining many countries’ economies. However, higher prices would also benefit Russia, China and Venezuela, precisely the countries that Washington wants to punish.

Would such a move by Iran provoke a direct US aggression? – One never knows with the war profiteers of the US. What’s for sure, such an intervention would not pass without a commensurate response from China and Russia.

On the other side of the scenario – imagine – countries mired in this global mess, made in the US of A, start looking for their own internal interests again, seeking their own sovereignty, independence from the globalist dependency. They are embarking on economic policies furthering self-sufficiency, self-reliance; first foodwise, then focusing on their scientific research to build their own cutting-edge technology industrial parks. A vivid example is Russia. Since sanctions were imposed, Russia has moved from a totally import-dependent country since the collapse of the Soviet Union, to a food and industry self-sufficient nation. According to Mr. Putin, the sanctions were the best thing that happened to Russia since the fall of the Soviet Union. Russia has been the world’s largest wheat exporter for the last two years.

Europeans have started quietly to reorient their business activities towards the east. Europeans may finally have noticed – not the elitist puppets from Brussels, but Big Business and the public at large – that the transatlantic partner cannot be trusted, nor their self-imposed EU central administration of Brussels. They are seeking their own ways, each one of these nations are seeking gradually to detach from the fangs of Washington, eventually detaching from the dollar dominion, because they notice businesswise the dollar-based economy is a losing proposition.

There is BREXIT, the most open move away from the ‘freedom limiting’ European dictate which is nothing else but a carbon copy of the economic dictate of the dollar, as practiced in the United States and everywhere the dollar is still the main international contract and reserve currency.

The Five Star Movement in Italy was created on similar premises – breaking out from Brussels, from the Euro-policy handcuffs. In a first attempt towards sidelining the Euro, they received a spanking from the euro-friendly Italian President, Sergio Mattarella, when he refused to accept the 5-Stars coalition partner’s, Lega Norte, proposed Eurosceptic Minister of Finance, Paolo Savona, who called Italy’s entry into the eurozone a “historic mistake”. This thrive by Italy to regain monetary sovereignty has by no means ended. To the contrary, it has taken strength and more determination. Germany moves in the same direction – quietly opening doors to Moscow and Beijing.

Unfortunately, these moves have little to do with a new more human and peace-loving consciousness, but rather with business interests. But perhaps conscious awareness – the reconnecting with the original spark of a humanity solidified in solidarity is a step-by-step process.

What if, considering the motion towards peoples’ new self-determination – Trump’s jumping from chaos to more chaos, to the never-ending sanction game (punishing, or threatening friends and foes alike) – will lead to a genuine de-globalization of the world?

If this were to happen then, we the 90% of the globe’s population, should be very grateful to Mr. Trump who has shown and created the path to enlightening – the enlightening of de-globalization.