you meant chained to their home

Dudley's main argument for why no inflation target increase: "retiring baby boomers will reduce savings...addressing climate change will require investment" - yes it will, $150 trillion over 50 years, most of which will come from QE. 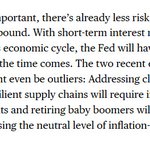 Tucker Carlson: “The Rise Of Left Wing Mobs In America”

During last night’s monologue, Fox News primetime host Tucker Carlson stood up to the left wing mobs that have been empowered by weak Democratic leaders who have “reflexively bowed to their demands”, allowing the establishment ofan “autonomous zone” in downtown Seattle, that will exist for about as long as the city’s techno-corporate overlords deem it in their political interest to allow it to exist.

Left wing mobs have seemingly come for everyone who doesn’t 100% agree with their radical views on endemic white supremacy in American society. And now they’ve renewed their attacks on Carlson and his producers (who have already survived one coordinated advertiser boycott), along with many others who don’t have nearly as many resources as the prime time Fox News host.

TUCKER: The Rise of Left-Wing Mobs in America pic.twitter.com/P9002rgWG8

Radical leftists have never had so much influence in the culture, largely thanks to weak political leaders and celebrities who share and support their propaganda as if it were the most fundamental truth.

“For now it’s enough to say that the country’s defenses have been badly weakened by decades of propaganda...we are too sinful to resist we deserve whatever we get…shut up and take it America,” Carlson said.

He then aired a clip from “Sesame Street” explaining the protests and how America has a “huge problem” with racism.

“Who are we? Well, at this point, we’re becoming North Korea. We now believe in blood guilt; we punish people for the sins of their relatives…we demand that the innocent plead guilty to things we know they didn’t do…then we order them to read their forced confessions in public…terrifying ideas now have free reign because nobody pushes back…some professional activist says something insane like “defund the police” – because that’s what professional activists do…and the rhetoric gets more disgusting.”

Two UCLA professors have been punished by the school, and threatened by the students, for seemingly minor transgressions like reading Martin Luther King out loud or requiring students to take an exam.

“Today the left has singled out one ethnic group but tomorrow it will be another…bigots never stop at just one,” Carlson said.

America doesn’t always live up to its ideals of freedom, equality and equal treatment under the law, but that’s why they’re ideals. People aren’t perfect, and neither is the American justice system.

Let’s not throw the baby out with the bathwater.

Tucker Carlson: “The Rise Of Left Wing Mobs In America”