BREAKING: One of the largest hospital systems in the United States gave race more weight than diabetes, obesity, asthma, and hypertension combined in its allocation scheme for COVID treatments, only to reverse the policy after threats of legal action. 🧵 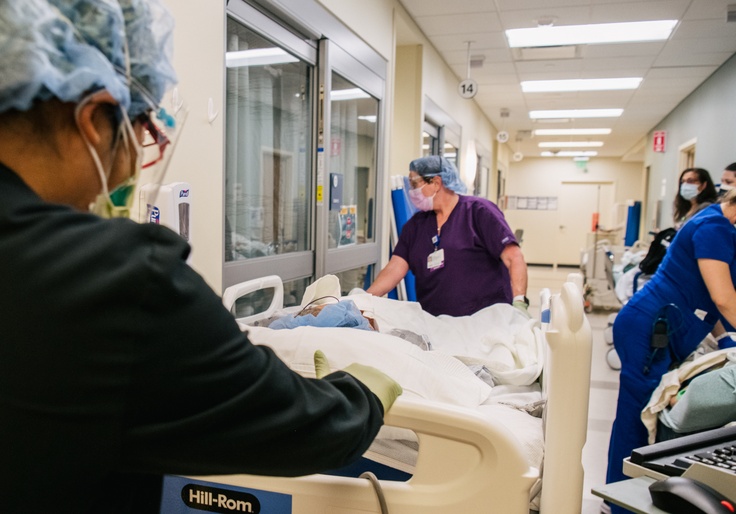 One of the largest hospital systems in the United States gave race more weight than diabetes, obesity, asthma, and hypertension combined in its alloca... 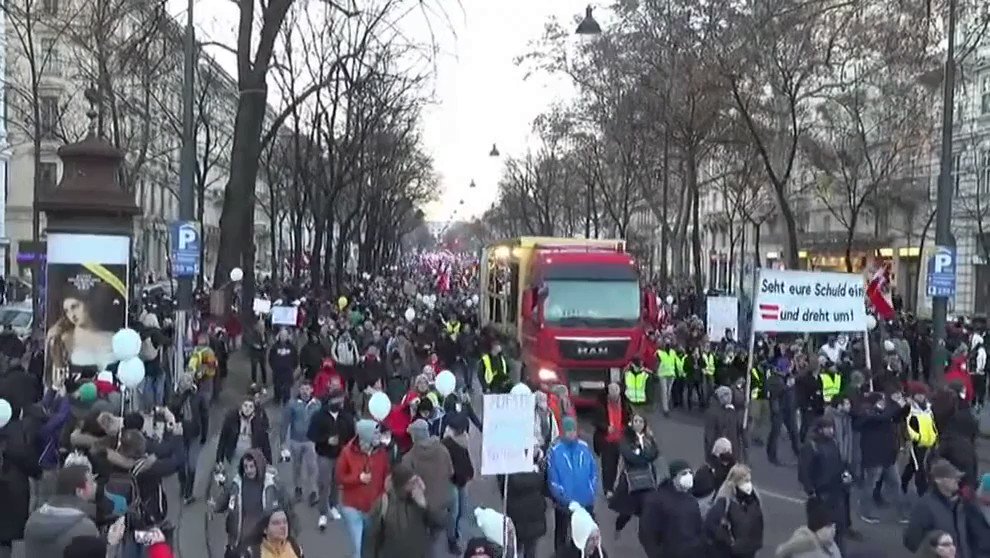 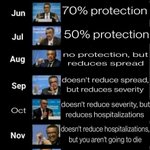 “Somebody could show me their fully vaccinated and boosted card and still be positive for COVID,”...“I’m not really sure exactly what it achieves, other than making it more uncomfortable for those that aren’t vaccinated.” 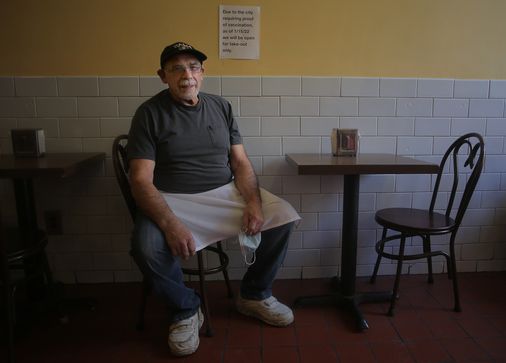 With the rules set to take effect Saturday, some retailers say the mandate is starting to feel like yet another COVID-related burden on the backs of b...

There are no shortcuts in media. You can’t force trust. If audiences listen to people like @joerogan much more than mainstream sources, critics should first ask why that might be, and realize trying censor or control his show will only compound their own trust problem.

Vaccine Censorship Backfiring…What To Expect Next

​Representatives from government and the corporate media will have you believe that due to an unsensational number of measles cases in the U.S., the fabric of American society must take historically dangerous and authoritarian measures. According to both media and government talking points, in order to combat an ambiguous specter of ‘misinformation,’ America must rapidly sink into a communist-slanting, medical corporatocracy. In the age of information, is censorship really that effective. In 2003 Barbra Streisand attempted to suppress photographs of her residence in Malibu, California. Her efforts had the exact opposite effect by inadvertently drawing further public attention to it. The phenomenon is now coined the Streisand effect whereby an attempt to hide, remove, or censor information has the unintended consequence of publicizing the information more widely, usually facilitated by the internet.

Channeling his inner Joseph McCarthy, Rep. Adam Schiff decided to weigh-in on parents sharing dissenting vaccine information online. Rep. Schiff, in a letter to Amazon head Jeff Bezos, employed his own vaccine misinformation to suggest the e-commerce giant censor certain vaccine-centered videos and books on its site. Schiff writes, “There is no evidence to suggest that vaccines cause life-threatening or disabling diseases…” Unfortunately, there are entire books written on the topic of vaccine injury, its biological mechanisms, and the “vaccine court” which has paid out over $4B compensation for injury and deaths at the hands of vaccination.

Amazon jumped at Schiff’s anti-American suggestion by hiding or demoting dissenting vaccine books and videos on its search engines and removing the streaming options for the award-winning documentary and Amazon best seller Vaxxed: From Cover-Up to Catastrophe.

Is the censorship working? Author and co-founder of Generation Rescue J.B. Handley reported that before calls for censorship this past week, his book How To End The Autism Epidemic  hovered around #5,000 on Amazon’s Best Seller list. At the time of this writing his book has raced to #106. Handley’s book is also #1 in the book categories of Immunology, Disability Parenting, and Popular Child Psychology.

Meanwhile, another popular vaccine book Dissolving Illusions: Disease, Vaccines, and The Forgotten History by Suzanne Humphries MD and Roman Bystrianyk has similarly raced to #33 on Amazon’s Best Seller list in addition to grabbing the #1 slots in the book categories of History of Medicine, History, and Viral Diseases. As for the film documentary Vaxxed at the time of this writing it is currently ranked #9 in Amazon’s overall ranking of Movies & TV behind 7-time Oscar nominated A Star Is Born and 4-time Oscar-winning Bohemian Rhapsody. ​
Facebook, Pinterest, and YouTube have also announced internal methods they are now employing to censor vaccine speech on their platforms. Articles and accounts who adhere to the limited and insulting talking points protecting Big Pharma’s vaccines products from proper scrutiny and science will rank higher in people’s Facebook feeds. As Vox writes, “These moves are encouraging for one reason: Misinformation about vaccines is dangerous.” The irony of witnessing a slew of journalists and media outlets celebrating censorship is not lost.

One place that the educated public and the censorship authoritarians see eye to eye on is that vaccine misinformation is dangerous. However, the lion’s share of such misinformation appears to be created and disseminated by the U.S. government and its regulatory agencies which is then parroted by media and mainstream medical bodies. Vaccine injury denier Rep. Schiff claiming “There is no evidence to suggest that vaccines cause life-threatening or disabling diseases…” came after the National Institutes of Health (NIH) Director Anthony Fauci’s lie heard around the world. Fauci recently gave testimony in front of the House Committee on Energy and Commerce. A committee whose pre-hearing memorandum brief written by Rep. Frank Pallone Jr. contained vaccine misinformation which was pointed out to him prior to the hearing by the group Physicians for Informed Consent to no avail.

Under oath and are subject to the penalties set forth in title 18, section 1001 of the U.S. Code, Fauci was asked by Rep. Brett Guthrie if the measles vaccine can cause encephalitis. Despite the encephalitis warning being listed on the MMR II’s package insert as well as being on the table of vaccine injuries regionalized for compensation in vaccine court by the Health Resources and Services Administration, Fauci said “no.” In short, Fauci lied. If it wasn’t for the slew of parents seated behind Fauci who then loudly voiced their disappointment, there would have been no correction. Fauci felt the pressure and then shouted out “Rare” before Rep. DeGette had to bang a gavel to restore order.

Once the hearing concluded, Fauci scrambled to gather his belongings and exit the committee to a overwhelming and constant barrage of parents expressing their discontent for his underhandedness. Martha Stewart, General Michael Flynn, and George Papadopoulos were each charged, under Title 18, United States Code, Section 1001, with lying to federal government agents. With sweeping censorship happening and over 100 active vaccine-related bills in 30 states, Fauci’s lie was capable of influencing the decision of the committee to which it was addressed. Will legal action be pursued?

The mad rush to pass legislation at the state level to eliminate all non-medical vaccine exemptions has seen record turnout against the bills. Testimonies across the country are being given by doctors, scientists and parents methodically dissecting every angle of inconvenient truth surrounding the unsettled vaccine science and broken government oversight apparatus. nearly half of the over 100 active vaccine bills are aimed at expanding and protecting the people’s rights, informed consent, and vaccine exemptions.

The heavy-handed move to censor and demote all dissenting vaccine information running counter to Big Pharma’s limited talking points couldn’t come at a worse time. Untold numbers of families have already had experience with vaccine injury and have been indiscriminately been called anti-vaxers for years by media and government agencies. In addition, it is now public information that both the U.S. Department of Health and Human Services (HHS) along with the Food and Drug Administration (FDA) have long-abdicated their duties to ensure vaccine safety and oversight. The FDA was legally forced to admit that it granted approval to both the inactivated influenza and TdaP vaccine for use in pregnant women without any clinical trials and safety studies enrolling pregnant women. In addition, HHS was legally forced to admit that it could not produce 30 years of periodic reports showing the agency had fulfilled it Congressional mandate to “promote the development of childhood vaccines that result in fewer and less serious adverse reactions than those vaccines on the market…” and to “make or assure improvements in…the manufacturing, testing, warning, field surveillance, adverse reaction reporting and researching on vaccines in order to reduce the risk of adverse reactions to vaccines.” In addition HHS was unable to provide sufficient answers or the missing scientific  studies prove vaccine safety, to show pre-licensure vaccine safety testing was done properly, adverse event surveillance

Hearings in D.C. along with highly inappropriate public comments by FDA Commissioner Scott Gottlieb have signaled a possible overarching U.S. government play to override state’s rights and current active legislation to eliminate all non-medical vaccine exemptions. However, the federal government has no power to mandate vaccines or tell states what to do on the issue. The U.S. Constitution’s 10th Amendment, dictates that all powers not delegated to the federal government are retained by the states or the people. Even the Supreme Court has recognized vaccine mandates as a state issue. ​

As the censorship continues to creep from the government organs, social media giants, and pharmaceutically-influenced media outlets, the public is signaling a growing hunger for the truth about vaccines. Unfortunately, the above listed entities have refused to leave the comfort of their limited echo-chamber talking points of ‘settled science’ vaccine injury denial. With all other factors remaining the same, expect an inverse relationship to the increase in multilevel vaccine censorship with a greater awakening and hunger for the newly censored truth about vaccines.

Vaccine Censorship Backfiring…What To Expect Next