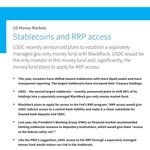 JPM: "Consumer Cash Pile May Be Exhausted By Mid-2023" https://www.zerohedge.com/markets/jpm-consumer-cash-pile-may-be-exhausted-mid-2023

“We’re Back In The Real World Where Bad News Is Bad News”: To $1 Trillion Fund Manager, Turmoil Is “New Normal”

For nearly a decade stocks enjoyed an environment of unprecedented bullishness, where good news was good news, and bad news was even better as it suggested central bank intervention via monetary stimulus, boosting asset prices. But that is no longer the case according to the head of Natixis SA’s $1 trillion asset-management arm who says that volatile equity markets are the “new normal.”

“We’re back to the basics: risk on, risk off,” Jean Raby, CEO of Natixis Investment Managers, said in an interview Tuesday at the Canada Fintech Forum in Montreal. “Over the past several years, in a way, bad news was good news because it meant a more accommodating monetary policy. Now we’re in the real world where bad news is bad news, and good news may not be such great news.“

The good news, according to Raby is that for now at least, the fundamental “bad news” is not quite as bad as markets have made it out in the past month, stressing that no single region is in contraction and emerging markets contagion from Turkey and Argentina is probably “overstated.”

“I have to believe, when I look at the fundamentals, that we are still on pretty sound footing.”

Natixis Investment, which is controlled by Groupe BPCE, France’s second-biggest bank, warned earlier this year that a global sell-off could hit its asset-management business, although higher volatility could benefit its trading operations.

While the recent Saudi turmoil has moved away from the front pages, Raby was asked about the longer-term impact on investment in Saudi Arabia, saying it’s too early to tell.

“It’s difficult for me to comment on where the future is going specifically for the kingdom of Saudi Arabia,” he said. “In the Middle East we have a relatively small presence. As far as we’re concerned I would like to believe that we could expand that.”

Raby also discussed the asset management space in Europe, noting that consolidation among large European asset maangers has remained “a very difficult thing to do” after his company’s failed combination with Axa SA’s asset-management business. He also said that smaller asset managers (2 billion to 20 billion euros) often hit “glass ceilings” in terms of higher technology and expansion costs, adding that “It’s those asset managers that come knocking on our door.”

“We’re Back In The Real World Where Bad News Is Bad News”: To $1 Trillion Fund Manager, Turmoil Is “New Normal”