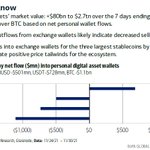 the world has almost run out of greater fools

Germany 🇩🇪 has the strictest mask mandate in the world (with N95 masks).

They have succeeded in flattening the curve, but unfortunately along the wrong axis... 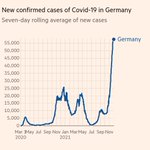 Goldman: "after enduring the original COVID-19 outbreak followed by waves from the Beta and Delta variants, investors may be determining that COVID waves are becoming a regular thing -- seasonal like the flu the perhaps."

Goldman: "Age composition of Omicron hospital admissions in South Africa has been younger than in the Delta wave, consistent with either the elderly benefiting from their higher vaccination rates or infections being more concentrated in the young" 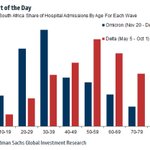 On an annual basis, Britain’s economy expanded at the slowest rate since the first quarter of 2010.

The Office for National Statistics (ONS) said UK GDP only grew by 1.0% in July-September, compared with 3Q18.

The economic slowdown has successfully transmitted weakness from manufacturing into the services sector.

Britain’s service sector only grew by .40% in July-September, signaling a broad-based slowdown is underway.

A manufacturing recession continues to damage the UK economy, and policymakers have so far failed to offer the right medicine if that is fiscal or monetary policy to correct the slowdown.

The chart below shows the true nature of the manufacturing slowdown.

The theme coming from the UK this morning is that a recession has been avoided, but that doesn’t mean the economy is out of the woods yet.

Tej Parikh, the chief economist at the Institute of Directors, told The Guardian that the economic slowdown would likely continue through 1Q20.

“The UK economy has been in stop-start mode all year, with growth punctuated by the various Brexit deadlines. Indeed, the pick-up in the third quarter numbers may slightly exaggerate the strength in the economy, with some activity likely to have been brought forward before October 31st. The final quarter of 2019 could be weaker as stockpiles continue to be run down,” Parikh said.

“While high employment has provided some support for the economy, underlying weaknesses in investment and productivity still need addressing. With uncertainty likely to persist and a continued slowdown in global markets, the onus is on the new government to stimulate economic activity and move the UK beyond its current yo-yo pattern of growth.”

Kallum Pickering of German bank Berenberg told The Guardian that Britain’s economy has steadily decelerated since the 2016 Brexit referendum.

“Intensifying Brexit uncertainties over the last three years have gradually eroded the UK’s underlying growth momentum. After averaging 0.6% in 2015, the average quarterly pace of growth has slowed each year since then. Down from 0.38% in 2018, the quarterly pace has slowed to 0.22% for the first three quarters of 2019 – barely half of the UK’s potential rate (c0.4%)

The slowdown highlights the pains of political uncertainties linked to Brexit and the upcoming general election on December 12th.

Despite the rebound in real GDP, at 0.5%, the quarterly pace of nominal GDP growth was the slowest of the year so far,” Pickering said.
*charts

Considering the broad-based slowdown across the economy, the UK might not be able to avoid a technical recession in the quarters ahead.