I have been covering the fraud that happens every year with how the CDC tracks incidents and deaths due to the annual influenza for almost a decade now.

The numbers used each year to scare the public into getting the flu vaccine are based not on actual data, but estimates of number of people who die from the flu according to the CDC. Basically, anyone dying from “influenza-like” symptoms are all lumped together into supposed flu deaths each year. Autopsies are seldom performed to prove cause of death.

The CDC has admitted publicly in the past that these numbers are just “estimates.” If the real number of those infected with the influenza virus, and resulting deaths, were vastly lower than what the CDC reports based on their “estimates,” the public would have no way of knowing it.

So this has presented quite a dilemma for the CDC for the first couple of weeks of the 2020-21 flu season, which have just passed.

Because “flu-like” symptoms could also be attributed to COVID-19, and they have the now widely known ineffective COVID PCR test to back up these claims, which also kicks in federal funding for hospitals to treat COVID patients.

As one might expect, with the media widely reporting that cases of COVID are now increasing just as flu season starts, reports of flu cases have dropped dramatically during the same time period last year. Across the globe, it has been reported that incidents of influenza have dropped by about 100%. (Source.)

Whoops! How did the CDC allow these numbers to be published?

In an apparent response to media reports about the fast declining flu cases here at the beginning of the 2020-21 flu season, the CDC did what any corrupt agency would do which doesn’t want the public to know the truth: They decided to “suspend data collection for the 2020-21 influenza season.” (Source.)

To my knowledge, this is unprecedented, and has never happened before.

There is a screen shot here in case they take this down due to public awareness (thanks to Patrick Wood). 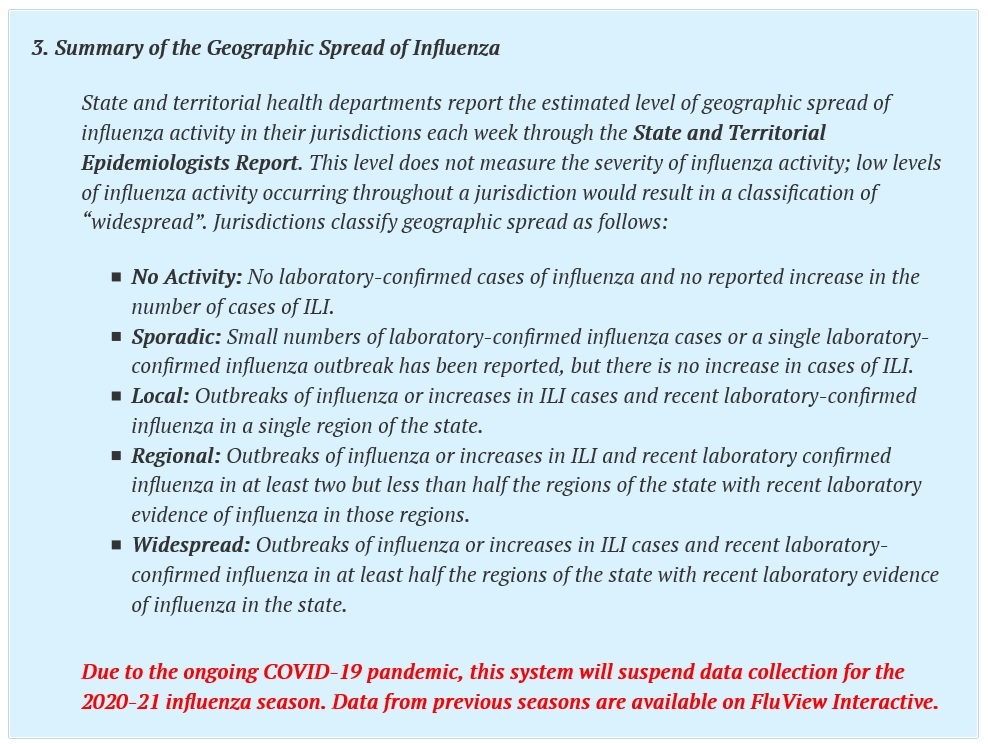 Correlation Between Flu Shot and Senior Deaths Allegedly due to COVID

It is important to remember that most of the deaths in the U.S. attributed to COVID have occurred among those over 70 years old, with co-morbidity factors.

Another factor to consider is that seniors over 65 in the U.S. get a different flu shot than everyone else each year, one that is much stronger.

Most of the initial deaths attributed to COVID in early 2020 occurred in nursing homes or assisted care facilities for the elderly, where the flu vaccine is routinely given every year as a matter of policy.

Deaths in these facilities are common every year just after administering the flu vaccine, but never reported in the corporate media.

Health Impact News had a nurse whistleblower contact us in 2014 to report that 5 seniors in a Georgia assisted care facility died the same week the flu shot was given. We were threatened with a lawsuit for reporting this. See:

A recently published study out of Mexico confirmed the correlation between senior flu shots and COVID deaths.

A recently published study in PeerJ  by Christian Wehenkel, a Professor at Universidad Juárez del Estado de Durango in Mexico, has found a positive association between COVID-19 deaths and influenza vaccination rates in elderly people worldwide.

According to the study, “The results showed a positive association between COVID-19 deaths and IVR (influenza vaccination rate) of people ≥65 years-old. There is a significant increase in COVID-19 deaths from eastern to western regions in the world. Further exploration is needed to explain these findings, and additional work on this line of research may lead to prevention of deaths associated with COVID-19.”

To determine this association, data sets from 39 countries with more than half a million people were analyzed. (Read the full article.)

War on Cash: The Next Phase

Plandemic: Plans For ‘Vaccine Passports’ Were In Place 20 Months Before COVID-19 Outbreaks

FDA Whistleblower Claims the FDA is Not Properly Inspecting Plants where Vaccines are Manufactured, Mainly Merck Who Will Begin Producing COVID Experimental Vaccines