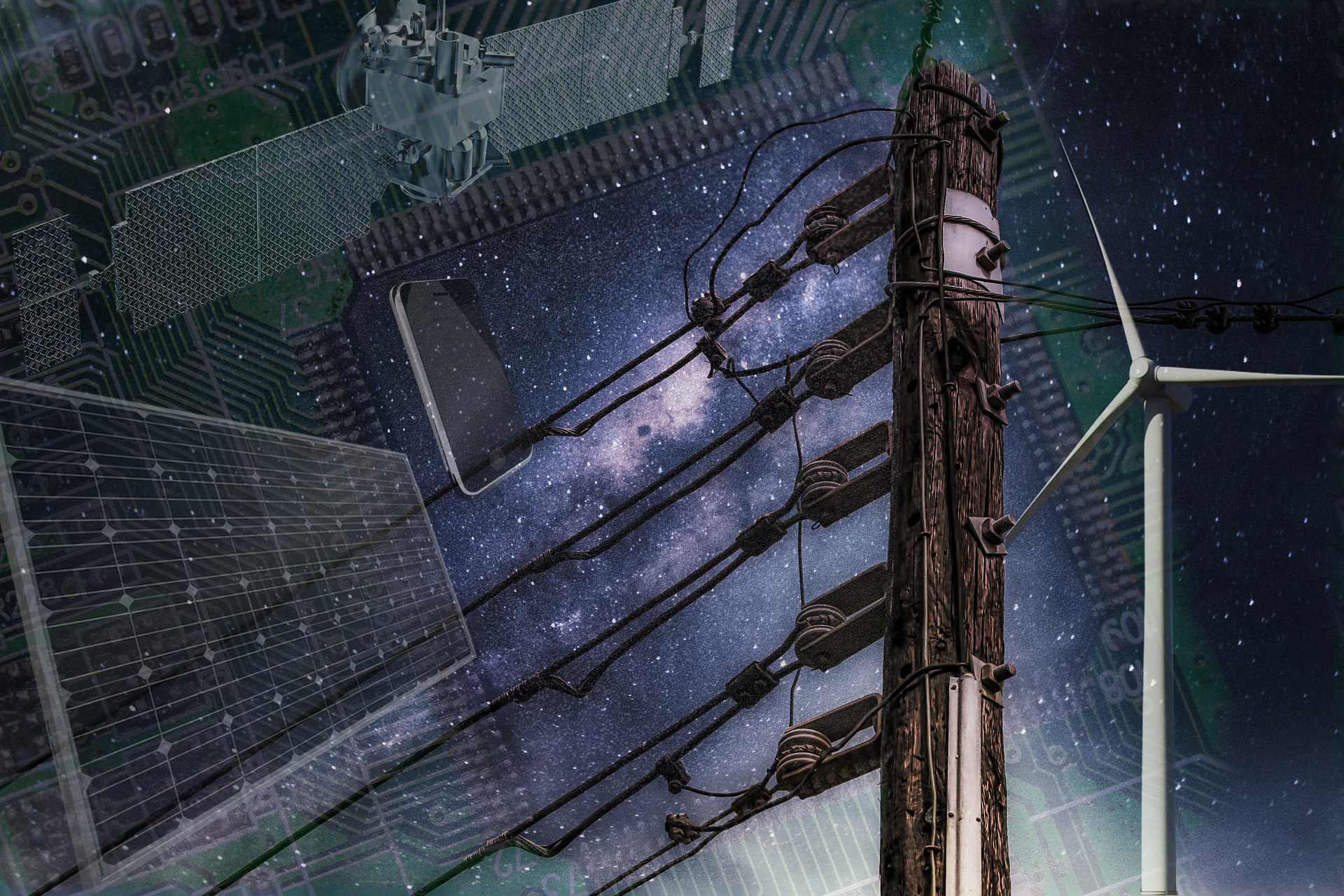 With all of the distractions taking place
throughout the U.S., there are some critical developments in the electricity
and energy power sector that people should be paying attention to. On May 1,
2020, President Trump signed executive order “Securing the United States
Bulk-Power System,” which was one of the most important executive orders to
date, yet it was a blip on most people’s radar. In fact, there have been a
string of key executive orders and bills put in place regarding the power
supply and technology sectors to protect the U.S. from potential harm. While
all eyes have been on 5G and Huawei, few seem to be paying attention to the
bigger picture – electricity, solar, “climate change” agendas, manufactured
parts, foreign interference and outsourcing – essentially, our entire powered
infrastructure.

There are three individuals who have
played vital roles in taking advantage of the U.S., running specific deals to
benefit China, and focusing on monopolizing the energy and technology industries,
among others, from high positions of financial authority, two of whom have
flown under the radar with most people.

To understand the significance of securing the U.S. bulk-power system which provides the electricity that supports our national
defense, vital emergency services, critical infrastructure, economy, and way of
life, below is a timeline of some key events leading up to this
executive order, President Trump’s mindset on this long before he became
President, and critical events that followed the order. Part two examines three
specific individuals who have been running deals in a small circle for decades,
with connections to familiar faces.

Former President Obama’s Department of Energy put together the “Island Playbook” so Richard Branson and the Clintons could carry out their “Ten Island Pilot Program” which resulted in over 20 islands, and has expanded to include Bill Gates, George Soros, and numerous others, whereby they are installing solar panels and wind farms while also building sustainable infrastructure and taking over the tourism industry to these islands. Corey’s Digs did a 4-part extensive report on this in 2018.

Trump tweeted that “the Chinese want to steal our jobs and technology – that includes so called green energy which they make but don’t use to any extent. They like good old fashioned oil and coal.”

Trump tweeted out “the concept of global warming was created by and for the Chinese in order to make U.S. manufacturing non-competitive.” In fact, between 2012 and 2015, prior to his presidency, Trump tweeted about the climate change hoax 38 times. Most of his tweets point to the fact that they changed the term “global warming” to “climate change” because it no longer fit their narrative, being as temperature increases weren’t in alignment with their tales, and this gave them the advantage over the narrative no matter which way the temps went. He also points out the World Bank and former president Barack Obama’s involvement.

Note the date of the tweets below.

Link to full article he included in his tweet.

In the loan from the DOE, the project summary lists the “owners” as BrightSource Energy, NRG Energy, and Google.

Between 2010 and 2011, the DOE financed five of the world’s largest concentrating solar power projects, during the Obama administration.

John C. Beale, the EPA’s leading expert on climate change, and highest-paid employee was sentenced to 32 months in federal prison for lying to his bosses and alleging he was a CIA spy working in Pakistan. Apparently, he told this lie for 13 years, and would disappear from work for months at a time while collecting a paycheck, under the guise of working for the CIA. Who knows what the real story is here, but the morale to the story is that this was their lead guy on climate change, and Beale stated that he did it for “simple greed,” a “sense of excitement,” and that “it was like an addiction.”

President Trump announced the U.S. withdrawing from the Paris Climate Accord.

President Trump imposed a 30% tariff on all solar equipment made abroad. The four-year tariff would reduce annually until it reached 15% in its fourth year.

The Justice Department launched the “China Initiative” to counter Chinese national security threats by prosecuting trade-secret and intellectual property theft, hacking and economic espionage. Between 2013-2016, the DOJ did not charge anyone with spying for China, but between 2017-2018 they charged three people.

The World Bank Group announced a program to fast-track the adoption of offshore wind energy in developing countries. The World Bank and IFC will be helping with technical assistance to develop a pipeline of projects ready for investment. A large amount of projects are already planned in Europe, China and the United States. Offshore wind accounts for $26 billion in annual investments and they anticipate $500 billion in investments by 2030.

Trump tweeted that it is not good or acceptable that Chinese telecom giant Huawei was hiring a former Obama cyber security official as a lobbyist.

Trump tweeted about allowing Huawei to buy product from our high tech companies that will not impact our national security.

Trump called for the World Bank to stop loaning money to China the day after the World Bank had adopted a plan to aid China with $1-$1.5 billion in low-interest loans annually through June 2025.

U.S. AG William Barr spoke at the ‘China Initiative Conference for the Center for Strategic & International Studies.’During his 30-min speech, he said that China wants to own the world. “In 2015, the Chinese leadership launched its made in China 2025 plan. A sustained, highly coordinated campaign to replace the United States as the dominant technological superpower. They have mobilized and invested hundreds of billions of dollars in this, while also carrying out espionage. He spoke about the level of theft China has carried out on U.S. technology, and went on to speak about their attempt to dominate 5G. Barr stated that “5G technology lies at the center of the technological and industrial world that is taking shape. In essence, communications networks are not just for communications anymore, they are evolving into the central nervous system of the next generation of internet, the industrial internet, and the next generation of the industrial systems that will depend on that infrastructure.”

This field could generate new economic opportunities to the tune of $23 trillion by 2025. If China continues to lead this field, it would give them full control to surveil and control shutting off other countries to communications access, which is a grave threat to national security and economics across the board. China has already captured 40% of the market and is moving full speed ahead, primarily through Huawei. Currently, Nokia and Erickson are the only two companies that can compete with Huawei. Barr’s speech goes into extensive detail as to how 5G will affect the future of the world. It is a must listen.

Trump signed Bill H.R.4988 ‘Secure and Trusted Communications Network Act of 2019’ which is a mechanism that prevents communications equipment or services that pose a national security risk from entering U.S. networks, and a program to remove any such equipment or services currently used in U.S. networks. This stemmed from the original ‘rip and replace’ bill to remove old Huawei and ZTE equipment from networks.

Trump signed an executive order to establish the Committee for the Assessment of Foreign Participation in the United States Telecommunications Services Sector.

The
order also makes clear that “the heads of all agencies, including the Board of Directors of the Tennessee Valley Authority
(TVA), shall take all appropriate measures within their authority as
appropriate and consistent with applicable law, to implement this order.

Many may recall the live meeting President Trump had with employees of the TVA regarding losing their jobs to foreign workers and concern of how the corporation is running things. On August 3, President Trump announced that he had fired the Tennessee Valley Authority Chair, and stated that the Chair was hiring foreign workers and replacing longtime employees while earning $8 million annually. The TVA is a federally owned corporation that provides flood control, electricity generation, fertilizer manufacturing and economic development to most of Tennessee and parts of Alabama, Georgia, Kentucky, Mississippi, North Carolina and Virginia.

The same day, Trump signed another executive order ‘Aligning Federal Contracting and Hiring Practices with the Interests of American Workers,’ which requires all federal agencies to complete an internal audit to prove they are not replacing qualified American workers with people from other countries. Prior to this order, the TVA had announced it had planned to outsource 20% of its technology jobs to companies in foreign countries.

The U.S. Senate approved new legislation that will require Chinese companies to submit to an audit that can be reviewed by the Public Company Accounting Oversight Board, which is the nonprofit that oversees audits of all U.S. companies seeking to raise money in public markets.

U.S. Senators introduced a bipartisan bill to boost U.S. production of semiconductors, small chips that power smartphones, missile systems, solar cells, and a wide range of other products. The “American Foundries Act of 2020” would allow for $15 billion in grants to states for building and expanding on semiconductor plants. “With the Chinese Communist Party’s continued efforts to dominate the rest of the world’s microelectronics industries through theft and coercion, it is critical that we work swiftly to strengthen domestic production of semiconductors and maintain our strategic competitive edge,” Sen. Jim Risch (R-Idaho) said.

The UK announced their decision to remove all Huawei 5G kits from networks by 2027 and mobile providers are banned from buying new Huawei 5G equipment.

President Trump’s Department of Energy recovered $200 million in taxpayer funds from a 2011 $1 billion loan by the Obama administration to a solar power plant in Nevada that was deemed obsolete before it went online.

It is clear by all of the actions above that President Trump’s administration is strongly focused on protecting our power grid, parts that are imported for various power supply components and telecommunications, building up manufacturing of power supply components in the U.S., 5G due to national security though there are arguments made over the safety of people’s health around 5G, and of course “climate change” strategies.

Sometimes, everyone is so focused on their immediate needs or endless distractions, that they don’t realize the threat to one of our most important necessities – electricity. There is a lot happening behind the scenes with battles on every front. This is one battle that the Trump administration is taking very seriously, and would appear to be making all the right moves.

There are three key players that have long been involved with the energy and technology industries, two of whom are from China and have flown under the radar. The agencies, organizations, and individuals that are affiliated with and doing business with these three is quite revealing, and some of the deals that have been made are shocking. All three are still in play. Part two will examine these connections. Coming soon!

Dig It! #126: Noncompliance, Speaking Out & Destroying the Narrative