Thee ‘experts’....A religion, a cult, conmen without long term data telling you to #JustBelieve #AppealToAuthority...what about the other experts saying the opposite? https://www.medpagetoday.com/special-reports/exclusives/93064

PARENTS: the #covid vaccine fanatics are coming for your kids at school. They aren’t even hiding it. “School-focused strategies” start next month.

And they as much as tell schools not to ask for parental consent unless required: these are “routine immunizations,” @cdcgov says. 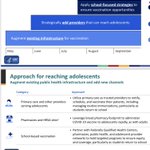 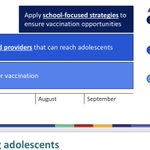 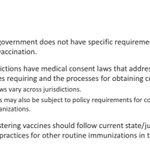 There is a little misunderstanding here. That is not how science work. For religion, I recommend 13th century Saint Anthony of Padua. A wise man with a passion for the poor. https://twitter.com/bergerbell/status/1402700447715008512

The Truth About The HPV Vaccine

The debate around the human papilloma virus (HPV) vaccine is rapidly changing. Over the past week seismic events have thrust uncomfortable truths into the public discussion. The release of the new book HPV Vaccine On Trial: Seeking Justice For A Generation Betrayed has changed the atmosphere around the unsustainable ‘safe and effective’ mantra pharmaceutical companies and their beholden health officials had desperately hoped the public would believe. The veil has been lifted in spectacular fashion by NYU School of Law faculty member and Graduate Lawyering Program Director Mary Holland and her co-authors Eileen Lorio and Kim Mack Rosenberg. Directly after the book’s official release, the authors sat down for a deep-dive HPV vaccine exposé with medical journalist Del Bigtree on his show The HighWire.

Among many points the book makes with supporting facts and science, the general public who is seeing the shocking information for the first time may be appalled to know the following points which the authors conclude:

Dr. Luc Montagnier, Nobel Prize Winner for Discovery of HIV endorses the book by saying, “This book reveals the tragedy of the HPV vaccine scandal.” After reading the book, Bigtree said of the pro-vaccine scientific community:

“I don’t believe they can any longer claim the high-ground on science. This is not science done the way it’s supposed to be done. You are not using placebos the way placebos were designed to be used. You are not testing for safety the way we’re supposed to. You are not reporting the injuries in your trials the way we always have throughout time.”

“We talked to Dr. Mehlsen who was in the clinical trials, he was a Merck Gardasil clinical trial physician…and his rate would be one in five hundred for serious injury for the HPV vaccine.”

The long trail of the HPV vaccine’s fraudulent science and suppression can be traced back to before the shot was even given the green light for use by the FDA in the mid 2000s. Pre-licensure clinical trials conveniently side-stepped key points to make the vaccine look safer than it actually was. It was exactly these HPV study errors that now-former Director of Cochrane’s Nordic centre Dr. Peter Gøtzsche was hastily and unjustly removed from his position for publicly spotlighting. A brief overview of the HPV vaccine clinical trials saw no use of an inert saline placebo but instead, an aluminum adjuvant vaccine was used thus compromising any attempt to compare the risks of adverse events. The pre-licensure studies also omitted the reporting of a category of harm the researchers called “new medical conditions.” Why was this category not fully brought to the attention of the public? A 2017 Slate.com investigative piece asked the same question.

“Approximately half the girls in both the vaccine cohort and the aluminum adjuvant-receiving cohort reported new medical conditions. And these were the healthiest of healthy young women that were in these trials.”

Researcher Dr. Chris Exley of UK’s Keele University, whose 35 year career focus has been to understand aluminum in living things, had this to say in a recent interview with Bigtree regarding Merck’s proprietary AAHS aluminum adjuvant contained in their Gardasil vaccine:

“Unfortunately we’ve asked them [Merck], “can we have some of this material” [to study]…and they’ve refused every time. So we’re not able to work on it. So we can’t know for sure, but using our knowledge of aluminum chemistry, it’s clear that this is going to be a more biologically reactive adjuvant.”

As it stands now, Merck enjoys the absence of scientific and legal scrutiny of their secret aluminum vaccine adjuvant while simultaneously having the HPV shot its contained in federally recommended by agencies like the FDA and the CDC. Furthermore, the new book points out that there has never been a safety study looking at the HPV aluminum adjuvants, the main drivers of the questionable immune activation events, in isolation. Are federal agencies taking pause as the controversial HPV vaccine continues to fall flat on its face when facing scientific scrutiny? It appears not as the FDA has just recklessly announced the expanded approval of Gardasil 9 for use in individuals 27 through 45 years old.

According to the World Health Organization (WHO), of all the women exposed to high-risk HPV strains, only 0.15 percent will ever go on to develop invasive cervical cancer. Regular pap smear screenings are the most effective method to identify any abnormal changes to cells or pre-cancerous tissue. Dr. Sin Lee, MD found and alerted world health authorities to dangerous contamination of DNA fragments in 16 different HPV vaccines collected internationally. Due to the unknown dangers of the HPV vaccine and the effectiveness of pap smears, which Dr. Lee has been reading for 40-50, he stated:

“If any woman should develop cervical cancer in the United States under regular gynecological care, its a potential malpractice suit.”

We are in a post-fact world now. There are two tracks racing in opposite directions. One direction is eager to ignore and conceal over a decade of sound science, research fraud and mounting injuries. Moving in the other direction are truths and a rapid public awakening to the dangers and fraud that the HPV vaccine embodies. For parents, finding the whole truth about the HPV vaccine, its risks and the science that points to its dangers has historically been a daunting task despite the mountain of evidence that has accumulated. However, those difficulties have forever changed now with the publication of the book HPV Vaccine On Trial and the recent HighWire exposé. At the very least, no respectable person operating from common sense can say moving forward that the science surrounding the HPV vaccine is settled. The facts and unanswered questions that have been put forth in the public domain exonerate countless parents worldwide seeking healing and justice for their HPV vaccine-injured girls and boys. Those posing valid criticisms around the safety and true need for authoritarian-like HPV vaccine campaigns pushed by governments and health officials can no longer be simply dismissed with a media-sponsored slur. The debate around this controversial vaccine and the flimsy science that unpins is being elevated to higher realms of scientific, legal and societal debate no longer allowing room for pharmaceutical company-inspired astroturf slogans like anti-vaxxer or anti-science created to render invisible a growing number of families with historically significant concerns and experiences at the hands of this dangerous product.

The Truth About The HPV Vaccine