Thread 1/ It is 100% inappropriate for the press to report that the link between the HCWs from cardiomyopathies and thrombocytopenia and from COVID19 symptoms has not been established. These events are data in the post-EUA trial for an experimental vaccine.

AI brings some amazing things when we ask nicely and keep it in box. 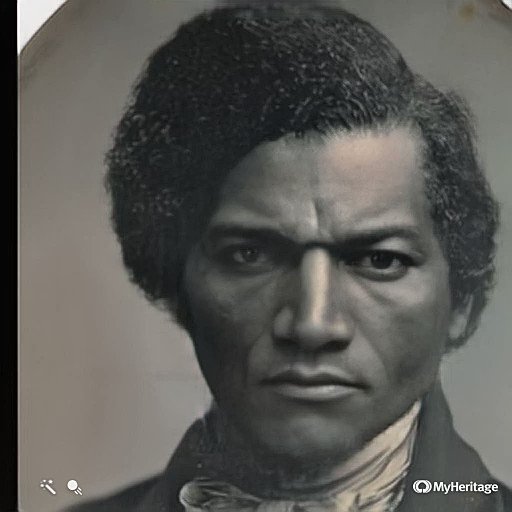 Frederick Douglass, the mighty abolitionist, was the single most photographed person in the United States during the nineteenth century. Here's how he might've looked in motion. Brace yourself and press play.

What is the Likelihood That SARS-CoV-2 mRNA Vaccines Will “Alter Our DNA”? Should You Be Concerned?

We live in a risk-averse world. We want no one to die or get sick “unnecessarily” – i.e., under conditions where the risk of that death or illness could have reasonably been eliminated, or, if not eliminated, at least minimized.

When SARS-CoV-2 entered the human population as a pathogen, most of our species had not seen it. Data from Trevor Bedford dating the age of the SARS-CoV-2 lineage, and my own research points to the fact that non-SARS viruses that were SARS-CoV-2 like may have existed as far back as 2005, or earlier.

If SARS-CoV-2 had entered the species before 2019, it certainly had not gone global – it might have caused a local pocket of pneumonia-related deaths not attributed to anything in particular. In fact, it may have done this many times over the past two or three decades. Because it was deadly, it could not survive long. When the species jump did take hold, sometime in 2019, the virus that made the leap was more transmissible, and perhaps a little less deadly.

The way SARS-CoV-2 creates disease in humans is nefarious. I predicted non-respiratory illness effects in April 2020, when I published my study introducing the concept of pathogenic priming. Sadly, many of the tissue and organ sites other than lung, including parts of our immune system, seem to be impacted by the virus, and our bodies’ immune responses to the virus, likely via the development of autoantibodies to proteins either found in specific organs, or in some cases, ubiquitously found in all cells. Autommunity in so many tissues occur given repeated exposures to the viral proteins in expected given the high level of similarity of the viral proteins to our own proteins – which is why I argued that the parts of the proteins should not be included in any vaccine.

Another question that occured to me in April that I did not have ready answer for what “What is the probability this virus will cause changes to our DNA?” This question is asked among scientists in the following way: Can we expect that the virus’ RNA genome, or any part of the viral genome, be copied into the human genome as DNA?

Dr. Teresa Deisher is an expert in insertational mutagenesis – the process by which foreign DNAs can enter the nucleus of the cell and become inserted into a person, or animal’s genome. In aprile, I asked her what the likelihood that the mRNA in an mRNA vaccine, such as Moderna’s vaccine, might by copied into the human genome. Her answer was an educated guess: about the same rate as that of the virus.

Now, many people are asking me the same question. Looking into the availables studies, we find this this study, by Zhang et al., (2020). published by the Whitehead Institute. The study is published on the biorxiv server and as of this writing (1/24/2020) has not been peer reviewed. Nevertheless, the study found that the viral genome can evidently be reverse-translated into DNA, a process that requires a special enzyme called reverse transcriptse. The study suggests that the result DNA (complementary to the vira RNA) can be copied in the human genome in two way: if human cells are infected with HIV virus, the reverse transcriptase enzyme can also act on the SARS-CoV-2 RNA. The SARS-CoV-2 genome was found to be transcribed into some humans cells not infected with a virus providing the reverse transcriptase protein, and the authors of the study speculated that the virus activates a dormant reverse transcriptase enzyme found in our genome in otherwise silenced ancient viruses called LINES.

So the movement of the RNA from the virus to the human genome may be expected to become incorporated in the human genome. What does that mean for the mRNA vaccine, which encodes a stabilized spike protein?

If the Whitehead study results are replicated, then the following must be kept in mind: The SARS-CoV-2 stabilized Spike protein mRNA molecule is an RNA molecule – and as such, it, too could reasonably be expected to picked up by any reverse transcriptase proteins. There are no data ruling out genomic incorporation of the mRNA from mRNA vaccines into the genome of cells in vaccinated people because the issue has not been addressed.

This very question came up during the FDA’s Vaccines and Related Biological Products Advisory Committee meeting considering the Pfizer vaccine (which according to Pfizer contains RNA that encodes (as communicated by Pfizer), a “full mutated spike protein” by two separate attendee (Dr. Moore and Dr. Meissner). Dr. Meissner specifically asked whether fetuses might be at risk of having its DNA changed via reverse transcriptase if the mother-to-be had been vaccinated. Pfizer and other vaccine makers have not directly addressed these questions.

Given the discovery of the Zhang et al. study, which showed it was possible for viral RNAs to modify the human genome, it seems reasonable that is might also occur with mRNA from mRNA vaccines. How frequently this might happen is unknown.

What About the Germline?

To many people, the more imporant question might be whether the vaccine could lead to permanent, heritable changes to the human genome adding new variation that is passed on from generation to generation, i.e., alteration of the germ cells. Germ cells give rise in sperm an egg, and any alteration of those cells at any stage of development – including, but not especially early fetal development, could lead to the insertion of new DNA into the human genome.

An imporant study that partly addresses the question is the biodistribution study of Bahl et al. (2012), a Moderna study designed to ask the question: where in the body does the encapsulated mRNA end up? If the tissues where the technology localizes the RNA includes the reproductive organs, it is conceivable that some instances of germline alteration might be possible.

The 2012 Bahl et al. study used mRNAs encoding proteins from influenza viruses, but nevertheless, the principle is demonstrated: the commercial mRNA product was found in the testes.

There were no data on the localization of the mRNA to the ovaries, nor to any fetal pups in pregnant mice.

The answer to the question of whether the mRNA vaccines might change the human germ line introducing heritable variation is “likely” – but again, the frequency which which such an event or to whom it might be more likely is unknown.

Neuroscientist Chris Shaw recently discussed this study with Del Bigtree on The Highwire, focusing primarily on the issue that the viral protein was found in the brain, and can be expected to induce the innate immune response in the brain, potentially contributed to microglial activation, immune cells in the brain that are stimulated to respond to viral infections or other foreign substances.

The question of whether you should be concerned or not is a personal one: if your creed, or religion, or personal desire to not have your own genetic lineage forever altered, you might favor approaches to addressing COVID19 infection that keeps viremia to a minimum.

However, if you believe that evolution makes sense of variation wherever its source, and are comfortable with the idea that your descendents might express COVID19 spike proteins, then either the infection or the injection might be your favored route.

In times like this, people must search deeply in their own constitutions and moral compass and determine for themselve which of two or more unwelcome paths they might prefer.

Thankfully, however, we now know that COVID19 viral infection likely confers immunity at least as long as the vaccine – meaning a willful injection with vaccine following prior COVID19 diagnosis might double the risk of genome and germline alteration. Similarly, initial exposure to a vaccine might cause vaccine induced enhanced viral infection, as describe by this paper in the journal Vaccines from 2009.

As an evolutionary biologist, I am not a fatalist. The future brings changes based on the conditions in which we find ourselves, and our decisions. In discussions with people who hold sincere religious beliefs, it seems that for some people who intend to reproduce, a natural course leaving outcomes to fate, can be maintained only by eschewing the vaccine, preventing double jeopardy of genomic alterations. For others, faith in the necessary outcomes will help them avert their fears, placing their destiny in the hands of God.

It is a reality that those who have designed these vaccines have created a tortuous set of conditions by the very nature of the vaccine design. Perhaps the best path forward is to provide feedback on their commercial product and provide feedback on treatment options such as Ivermectin, which the NIH has now updated to leave as a choice between a physician and their patient (See FLCCC.net). Ivermectin will never cause changes to our genome or germline.

James Lyons-Weiler is the CEO/Director of The Institute for Pure and Applied Knowledge.

Hooman Noorchashm, MD,PhD Should We Screen Before COVID19 Vaccine?

Robert F. Kennedy, Jr.: Reason, Not Fear, Must Dictate our Analysis of Deaths in the Elderly Following COVID19 Vaccines

Why Math is Not Real, Or How a Biologist Saved Mathematics and May Yet Save Physics

Does Technology Corrupt or Attract the Corrupted?

What is the Likelihood That SARS-CoV-2 mRNA Vaccines Will “Alter Our DNA”? Should You Be Concerned?